With the presidential election now less than a day away, it seems that all things in life come with a presidential twist. I’m sure that many, if not most conversations these days are dominated by or at least include some reference to the upcoming election and of course it is impossible to watch five minutes of television with out coming across a some form of politically sponsored content.

In keeping with this recent spirit of presidentialism, I thought it might be interesting to take a look back at one of our founding fathers, the quintessential president if you will, George Washington. And to take this look, through the lens of our passion here at Madison Seating, furniture.

In April 2009, the Collectors Weekly ran an excellent article on all the furniture items used by George Washington from his time in the Franklin House while president-elect, through his time spent in Philadelphia and then of course, Washington D.C. where much of it remained until the British burned down the capital in the war of 1812. Selected by Lady Kitty Duer and Mrs. Hannah Osgood, most of the pieces where of the Hepplewhite style, then the height of fashion, and made mostly out of mahogany wood. Some pieces however, like the set of five chairs pictured below, were of the Chippendale design, a name that has since been associated with some of the most sought after and expensive pieces in the world.

When Washington left the Presidency, there were a good many articles in the Philadelphia house which he had purchased, but which he had no use for at Mount Vernon. Consequently, after such pieces as he wished to keep were shipped to Virginia, some of the remainder were given to his friends and the balance sold. The latter articles were, in general, bought by a few of the then leading families in Philadelphia and through such sources many of them are now known.

These are some of the many elaborate and extravagant furniture pieces that once made up the collection of this countries most illustrious president. 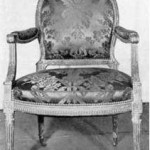 Drawing-Room Armchair: With carved and painted frame, the design is typically French. 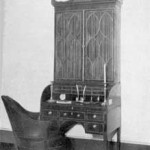 Washington’s Desk and Armchair: These pieces were purchased during his Presidency —probably from Thomas Burling, New York cabinetmaker. 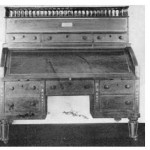 Mahogany Desk Owned by Washington: This was sold at the time he retired from the Presidency. 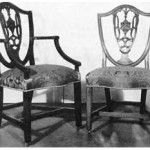 Set of Washington Chairs: These Hepplewhite chairs, both arm and side, were owned by him while President. 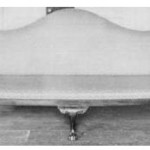 Mahogany Chippendale Sofa Owned by General Washington While Living in Philadelphia: When he retired from the Presidency and returned to Mount Vernon, this piece was sold to Robert Morris. 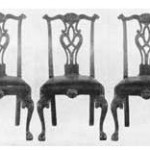 Set of Five Chippendale Side Chairs from Washington’s House: This set was for many years in the collection of Colonel Frank M. Elting, curator of Independence Hall.