The Real Presidential Debate…to Sit or Not to Sit. 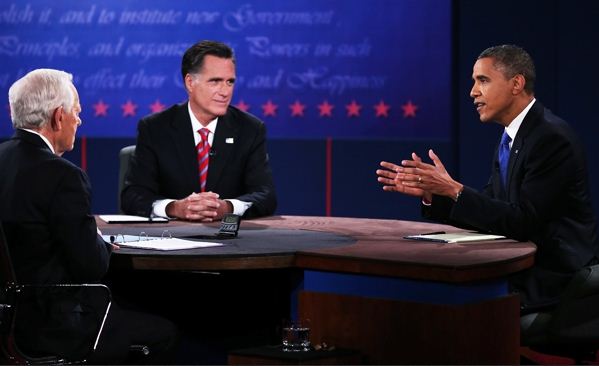 It is a great and humbling honor to bring you this latest in cutting edge debate analysis. Last night, millions of Americans watched as, once again, the candidates sparred over foreign policy, the economy and the lamentable lack of “horses and bayonets” in the world today. But perhaps the single most crucial and fundamentally telling aspect of last nights proceedings, was the fact that all this took place sitting down!

In Denver on Oct. 3rd, at the first of the three debates, both candidates were given nothing more than a podium to stand behind while the issues were discussed. Granted I am no political analyst, but I would have assumed these men at the very least influential enough to have arranged for two folding chairs, maybe even the ones with the cushions on them (though I guess that might have been pushing it a little…). I mean after all, they where the only two chair-less people in the whole building!

In any case, it is obvious that at least one of the candidates had their “people” talk to someone else’s “people”, because at the second debate in Hempstead, N.Y., the presidential legs along with those of candidate Romney where finally granted some reprieve. As the Town Hall style debate rolled on, the candidates where occasionally seen to perch, not quite sitting and not quite standing, on the chair-like stool sitting on the stage with them. A step in the right direction, but not quite enough.

By the time last night’s debate rolled around, it was apparent that there had been a lot more behind the scenes political maneuvering going on, because, as the candidates walked out onto the Lynn University debate stage last night, they were greeted by a sight that I am certain must have greatly warmed their hearts, Chairs! Not podiums, not over-dressed stools masquerading as chairs, but real, plush executive style armchairs, into which both candidates promptly plopped their no-doubt relived lower bodies. The debate, ladies and gentlemen, is over. When it comes to Chair Vs. No Chair, Chair wins, every time.

In conclusion, ladies and gentlemen, I call upon you all to do the patriotic thing and sit comfortably, because to stand, it has been determined, is simply un-American. And if you are wondering where the best place to secure for yourself a chair worthy of a presidential candidate is, why, you need only visit our executive chair section and choose from a long list of exceptional makes and models.