Know Your Furniture: The Rolltop Desk 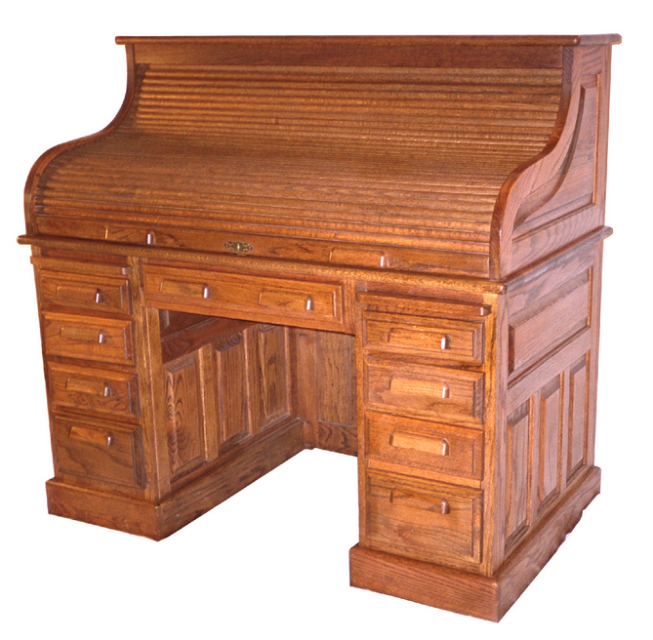 Though perhaps not as obscure as some of the other furniture pieces discussed in this series, I chose the rolltop desk for today’s Know Your Furniture segment because to me, the ingenuity of the design was never given the full appreciation or exposure it deserved. Practical, clever and way ahead of it’s time, the rolltop was the mainstay of small business offices at the end of the 19th century and the beginning of the 20th.

The  rolltop desk is a 19th century reworking of the pedestal desk with, in addition, a series of stacked compartments, shelves, drawers and nooks in front of the user. The compartments and the desktop surface of a roll top desk can be covered by means of a tambour consisting of linked wooden slats that roll or slide through slots in the raised sides of the desk. In that, it is a descendant in function, and partly in form, of the cylinder desk of the 18th century. It is a relative of the tambour desk whose slats retract horizontally rather than vertically.

Unlike the cylinder desk, the rolltop desk could be mass produced rather easily since the simple wooden slats could be turned out very fast in a uniform way. In contrast, the wooden section of a cylinder had to be treated with great pains to keep its form perfectly over time, lest it warp or bend, and make it impossible to retract or extend. The wooden slats of the rolltop’s tambour were usually joined together by being all attached to a cloth or leather foundation, and were thus less influenced by the problems which plagued the cylinder desk.
It gradually fell out of favor with the introduction of the steel desk and the coming of greater quantities of correspondence and other documents, which made the small stacked drawers and small shelves obsolete. There were just too many letters to bother folding them again and placing them in the proper slot and there was too little time to open and close all the small drawers to look for things.

Even today rolltop desks are popular as an antique item. They are usually expensive especially if the wood used is expensive.

Because it was produced in vast numbers and at varying levels of quality, the rolltop desk is popular in the antique market. It is also popular amongst set decorators who want to recreate the “ambiance” of an office at the turn of the previous two centuries, or during famous eras like prohibition. The rolltop has starred in many plays and movies, the most famous one being probably a movie titled His Girl Friday with Cary Grant and Rosalind Russell.