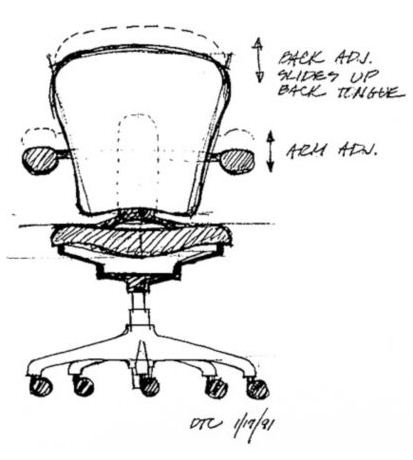 Yup, as the title so subtly suggests, we are back to my favorite topic – The Aeron™ ergonomic miracle chair by Herman Miller.

Today’s  post concerns a much lesser known aspect of the Aeron™ chair, it’s history and development. We are all familiar with the Aeron™ as the quintessential must have office accessory of the modern workplace. To those in the know, the Aeron™ is both an ultimate comfort item and coveted status symbol. To be an Aeron™ user, is to be the proud owner of an office chair that is sleek, stylish and on the cutting edge of ergonomic design.

News flash, it was not intended to be that way. Not at all.

In a recent article posted on Slate.com, Cliff Kuang reveals the true history of the design project that resulted in the Aeron™ we know today. According to Kuang, the project started out as a quest for the ultimate sitting design…for the elderly! And in the words of Mr. Kuang, here is how it all went down…

“One of the Aeron’s designers was Bill Stumpf, the son of a gerontology nurse and a preternaturally keen observer of human behavior. So he was well primed in the late 1970s, when the American furniture company Herman Miller began casting about for growth prospects and hired Stumpf and Don Chadwick—who had done several pieces for Herman Miller—to investigate the potential of furniture for the elderly.

It seemed like a tantalizing market opportunity. The American populace was aging quickly, assisted living facilities were rare, and hospitals lacked ergonomic furniture suited to long-term care. In each environment, Stumpf and Chadwick observed the surest sign of an opportunity: furniture being used in unintended ways. The homely workhorse common in both medical and residential settings was the La-Z-Boy. In hospitals, the elderly often got dialysis in semi-reclined La-Z-Boys; at home they spent hours in them watching TV. “The chair becomes the center of one’s universe. These sorts of realizations at the time weren’t just overlooked, they weren’t [deemed] important,” says Clark Malcolm, who helped manage the project. Those observation studies and focus groups “made Bill and Don focus on seating, in a way they never had before.”

The La-Z-Boy was terribly suited to both settings. The elderly, with weakened legs, had to back up to the chair and simply fall backward. The lever for reclining was awkward to reach and hard to engage. And, worst of all, the foam stuffing, often upholstered in vinyl, spread the sitter’s weight unevenly while retaining body heat and moisture—potentially causing bedsores.

Stumpf and Chadwick addressed all of those problems with the Sarah chair, which was finally completed in 1988, as part of a larger study of in-home medical equipment dubbed Meta-forms. To solve the falling-backward problem, they settled on a footrest that, when closed, folded in under the seat, leaving the sitter with room to curl her legs under the chair as she sat down, thus bracing herself. When a sitter was fully reclined, fins flipped up, supporting her feet—like the fins on a wheelchair—and keeping them from falling asleep. The lever was banished in favor of a pneumatic control inspired by the recline buttons found on airplane seats.

But the chair’s greatest innovation was hidden: Its foam cushions were supported not by an upholstered wooden box, as was typical at the time, but by a span of plastic fabric stretched across a plastic frame. The foam could thus be thinner and more able to mold to the body. And because the foam’s backing was exposed to air, the design mitigated heat build-up.

“People became emotionally attached to that chair,” says Gary Miller, who headed Herman Miller’s R&D department at the time and eventually oversaw the Aeron project. Everyone who sat in it seemed to mention a parent or a sibling who needed it. But Herman Miller’s management balked at how futuristic it was. No one could figure out how to sell it, since there weren’t any stores selling high-design furniture to the elderly. The company was in far greater need of high-margin office chairs, so they killed the Sarah.

Stumpf and Chadwick were personally wounded, and drifted out of contact with Herman Miller for a period. Inside Herman Miller, people who’d seen the Sarah chair as well its accompanying Metaforms products grumbled that the company was being short-sighted. But eventually Herman Miller did come back to Stumpf and Chadwick, asking delicately if there were anything that could be saved from the Sarah work and applied to the office.

“They licked their wounds for some time,” says Gary Miller. “They resolved to come in with guns blazing.” Stumpf demanded one condition: that he and Chadwick could pitch directly to the executive board, rather than just the company’s design director, who had battled Stumpf over a fundamental disagreement about whether design at Herman Miller should focus on problem solving, as Stumpf believed, or on aesthetic refinement, in the vein of the old-line European furniture houses.

The design concept that Stumpf presented in 1992 took the lessons of the Sarah to their logical extreme. “We started to realize that people were interacting with computers and keyboards in all sorts of positions. They’d have the keyboard in their lap. Or they’d be at their desk slouching back, semi-reclined,” says Chadwick. So they proposed a reclining mechanism based on the Sarah’s, one that allowed the seat pan and chair back to move in concert. And, most importantly, they came up with the idea of getting rid of the Sarah’s foam altogether. The right fabric mesh, they argued, would mold to any person’s shape—what prevented bedsores would also keep people comfortable. In the end, the chair’s oddball looks would be a direct expression of its engineering.

Stumpf and Chadwick also argued forcefully that the design would benefit both the environment and the bottom line. The executives recognized the truth of this argument intuitively. “The chair plant was filled with foam hanging from the ceiling and curing in the open air, everywhere you looked. It smelled horrible,” says Gary Miller. “You had to wonder, ‘Where’s the end to this? How can this scale?’ ” Chairs at the time were mainly foam; foam was a huge part of their cost. Without it, the chair’s economics would change radically. “Green wasn’t an issue at the time,” says Chadwick. “But instinctively, we felt the importance of getting more performance from less materials.”

Herman Miller’s CEO, Dick Ruch, stewed on the decision for a few days. Finally, he signed off. It was an enormous risk: Because of the company’s production schedule, the inordinately expensive plastic molds for the frame would have to be made before the engineers even knew if they would be able to find a suitable fabric. Chadwick eventually led the invention of one, and the chair gradually came to life in increasingly futuristic prototypes.

When the Aeron was finally done, Herman Miller’s executives had warmed to Stumpf and Chadwick’s problem-solving rigor, but remained leery about the chair’s weird looks. They turned out to be a major selling point, making the chair seem incomparably advanced. One dealer in Hollywood, shortly after its unveiling in October of 1994, reported putting his first floor sample in the window, and hearing cars screech to a halt upon seeing it. By 1996, the orders were already dwarfing Herman Miller’s expectations. Pop culture had made it a phenomenon: Will, on Will and Grace, spent an entire episode trying to get an Aeron. Then the crash came. The dot-com-era profits helped keep Herman Miller alive in the early 2000s, and sales eventually bounced back. Nearly 7 million Aerons have been sold to date, and another one comes off of Herman Miller’s lines every 17 seconds.”